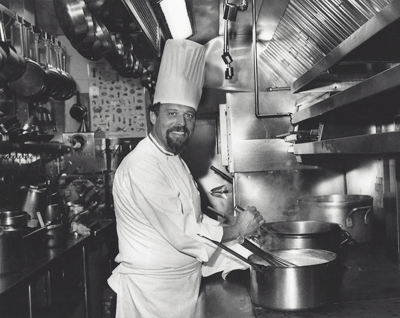 Chef Jean Banchet (March 7, 1941—November 24, 2013) was a larger-than-life chef who is not only credited with bringing fine dining to Chicago through his restaurant, Le Francais but was instrumental in making Chicago the culinary destination that it is today.

Born in Roanne, France (a small town near Lyon), Banchet worked at many restaurants in Europe, training at La Pyramide and eventually coming to the United States to work at the Lake Geneva Playboy Club in 1968. In February of 1973, Banchet ventured out on his own and opened Le Francais in Wheeling, IL. Here, he transformed dishes and created a culinary experience unlike anything the area had ever seen. In 1980, Bon Appetit magazine declared Le Francais "America's Best Restaurant," and in October of 2013, he was inducted into the Chicago Chefs Hall of Fame.

The inaugural Jean Banchet Awards for Culinary Excellence took place during the Grand Chefs Gala on February 2, 2002 and recognized the culinary accomplishments from the prior year (2001).

The idea for the Banchet Awards was dreamed up by the Cystic Fibrosis Foundation and Pastry Chef Alicia Boada, who currently works as Barry Callebaut’s West Coast Technical Consultant for the Chocolate Academy USA in California. Chef Boada, along with CFF, wanted to create a platform to recognize the Chicago’s culinary achievements and honor the community of chefs, restaurants and sommeliers who were influencing the city’s remarkable culinary scene.

When it came to finding a namesake for the awards, Chef Jean Banchet was a natural choice. Not only was he instrumental in bringing fine dining to Chicago but his recent retirement made it the perfect opportunity to create the longstanding legacy that such a great chef, man, influencer deserved. Chef Jean Banchet graciously accepted and since then, the Banchet Awards have taken place during the Grand Chefs Gala, recognizing culinary achievements from the past year. In 2016, due to their popularity, the awards were held on their own night and were truly a celebration of Chef’s legacy and the talented individuals who represent the Chicago culinary scene.